A fire fighting system is probably the most important of the building services, as its aim is to protect human life and property, strictly in that order.  It consists of three basic parts, a large store of water in tanks, either underground or on top of the building, called fire storage tanks a specialised pumping system,  a large network of pipes ending in either hydrants or sprinklers (nearly all buildings require both of these systems)
A fire hydrant is a vertical steel pipe with an outlet, close to which two fire hoses are stored (A fire hydrant is called a standpipe in America). During a fire, firefighters will go to the outlet, break open the hoses, attach one to the outlet, and manually open it so that water rushes out of the nozzle of the hose. The quantity and speed of the water is so great that it can knock over the firefighter holding the hose if he is not standing in the correct way.  As soon as the fire fighter opens the hydrant, water will gush out, and sensors will detect a drop in pressure in the system. This drop in pressure will trigger the fire pumps to turn on and start pumping water at a tremendous flow rate. 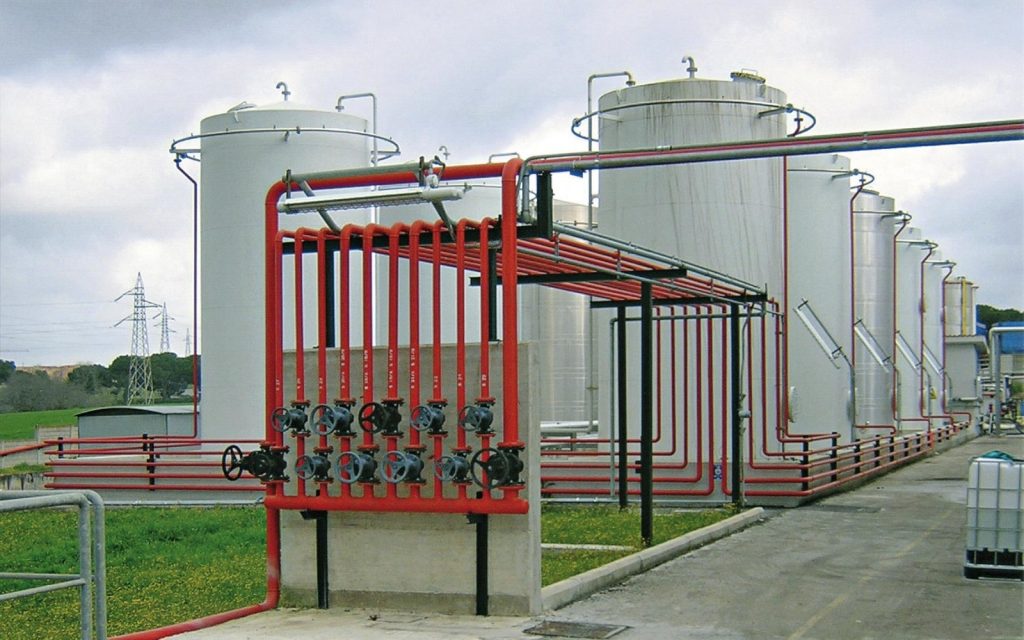 A sprinkler is a nozzle attached to a network of pipes, and installed just below the ceiling of a room. Every sprinkler has a small glass bulb with a liquid in it. This bulb normally blocks the flow of water. In a fire, the liquid in the bulb will become hot. It will then expand, and shatter the glass bulb, removing the obstacle and causing water to spray from the sprinkler. The main difference between a hydrant and a sprinkler is that a sprinkler will come on automatically in a fire. A fire hydrant has to be operated manually by trained firefighters – it cannot be operated by laymen. A sprinkler will usually be activated very quickly in a fire – possibly before the fire station has been informed of the fire – and therefore is very effective at putting out a fire in the early stages, before it grows into a large fire.  For this reason, a sprinkler system is considered very good at putting out fires before they spread and become unmanageable.  According to the NFPA of America, hotels with sprinklers suffered 78% less property damage from fire than hotels without in a study in the mid-1980s.

We are the one of the best online Oil and Gas , Power industries ,Chemical plant ,Pharma industries ,Solvent extraction and Automobile industries related software course provider. We are teaching course the scope is much worth as equal to you pay. Learn and enter into the bright career future.

Join us a Tutor